2019 was another busy year at the NC Clean Energy Technology Center (NCCETC), and the clean energy industry in general. Center staff have worked hard to advance clean energy technologies throughout 2019, as well as partner with industry and other industries to make this happen.

“The release of the NC Clean Energy Plan was the biggest accomplishment of the year, but there were many other fronts that we are proactively working on, including access to clean energy for people of limited income, development of resilient energy systems, and supporting business and industry on saving energy and reducing costs,” said Isaac Panzarella, Assistant Director for Technical Services at NCCETC.

Below is a recap of highlights from the year at NCCETC. Thank you for a great 2019!

Also in January, the second round of the Clean Fuels Advanced Technology (CFAT) grant project funding was released, and 22 CFAT projects were awarded by the end of the year (stay tuned for more information on this soon!). In addition, the Town of Apex, which worked with the Center to review the town’s solar policies and develop a list of solutions and recommendations, adopted a large portion of those recommendations. As a result, the Town of Apex announced they received a designation of SolSmart Gold, which only five other North Carolina towns have received.

In February, in a similar fashion with the Town of Apex, NCCETC began working with SolSmart in Fairfax County, James City County, and the Town of Blacksburg in Virginia as SolSmart  advisors to help bring down the “soft costs” on solar PV, including  permitting, planning, raising community awareness and other related activities – with a successful outcome of being designated Bronze, Silver and Gold the following August. “The actions taken by local communities will serve their long term resilience and help them enable more solar in their communities,” said Anne Tazewell, Special Projects Manager at NCCETC. “I am grateful to have some part in making this happen.”

The final Powering Energy Efficiency Impacts Framework (PEEIF) report was released in March, which was a two-year U.S. Department of Energy (DOE) sponsored initiative focused on developing a data-driven framework to increase energy-related program effectiveness in low-income households. The project team was a diverse multi-sector partnership including NCCETC. 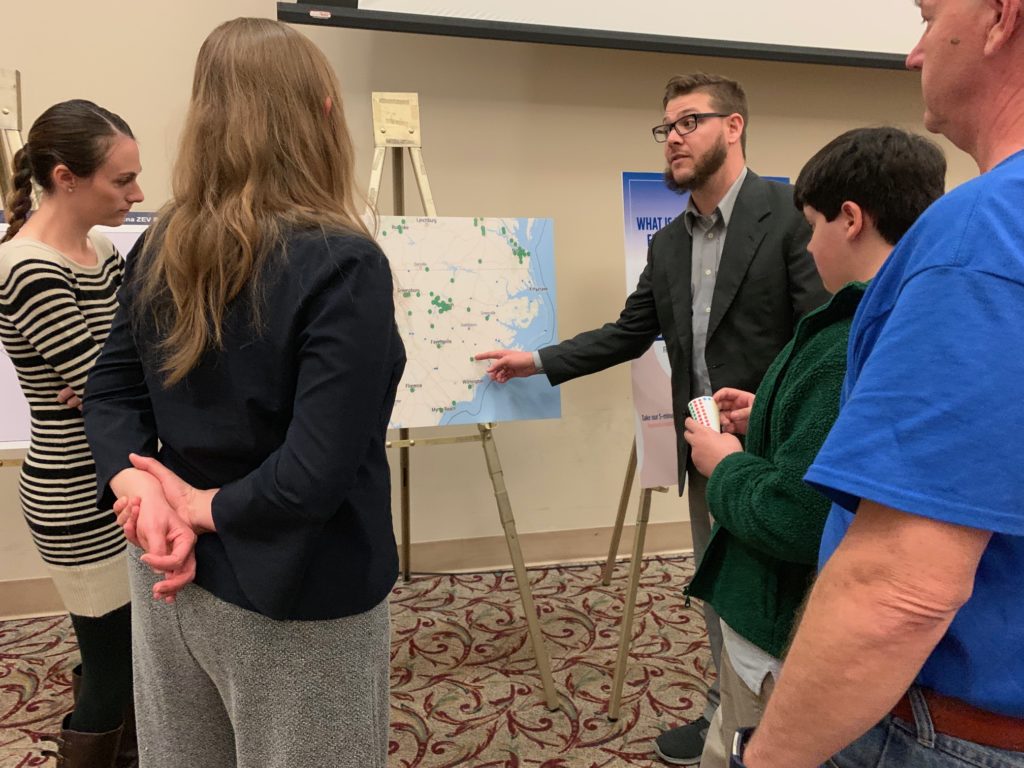 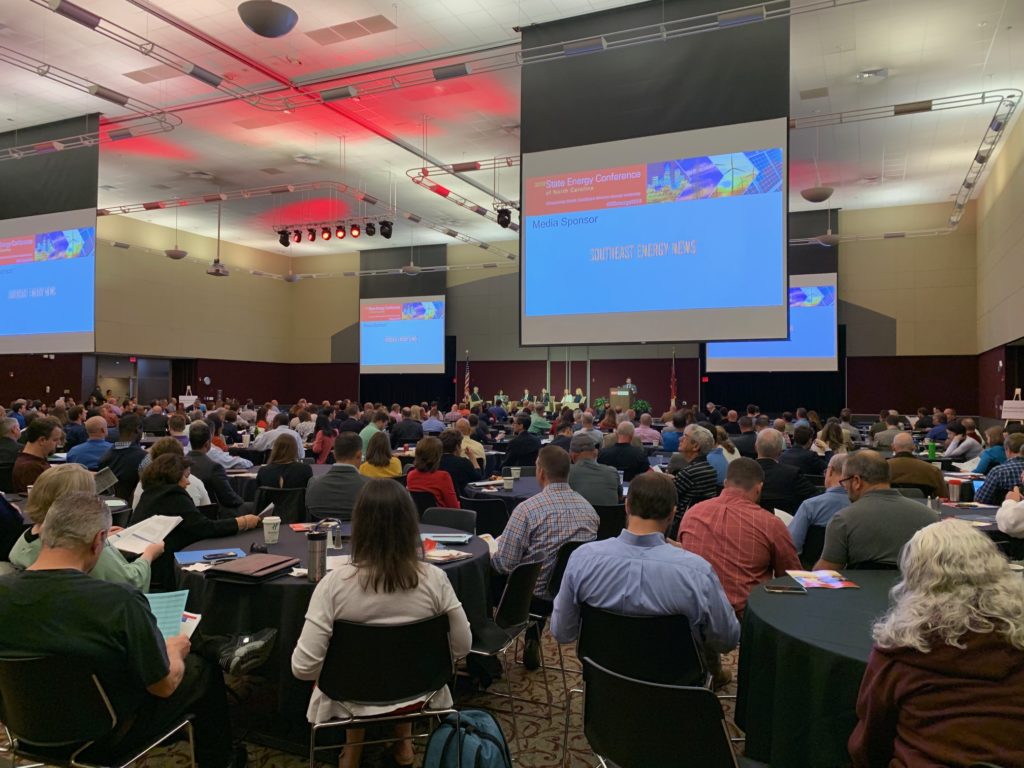 The Center held two large conferences, each breaking record attendance from previous years. Around 900 energy professionals from a variety of backgrounds gathered for the 2019 State Energy Conference of North Carolina in April, with the theme “Connecting North Carolina’s Diverse Energy Economy.” Attendees listened to and connected with industry leaders while sharing their own ideas about North Carolina energy’s present and future over two days. 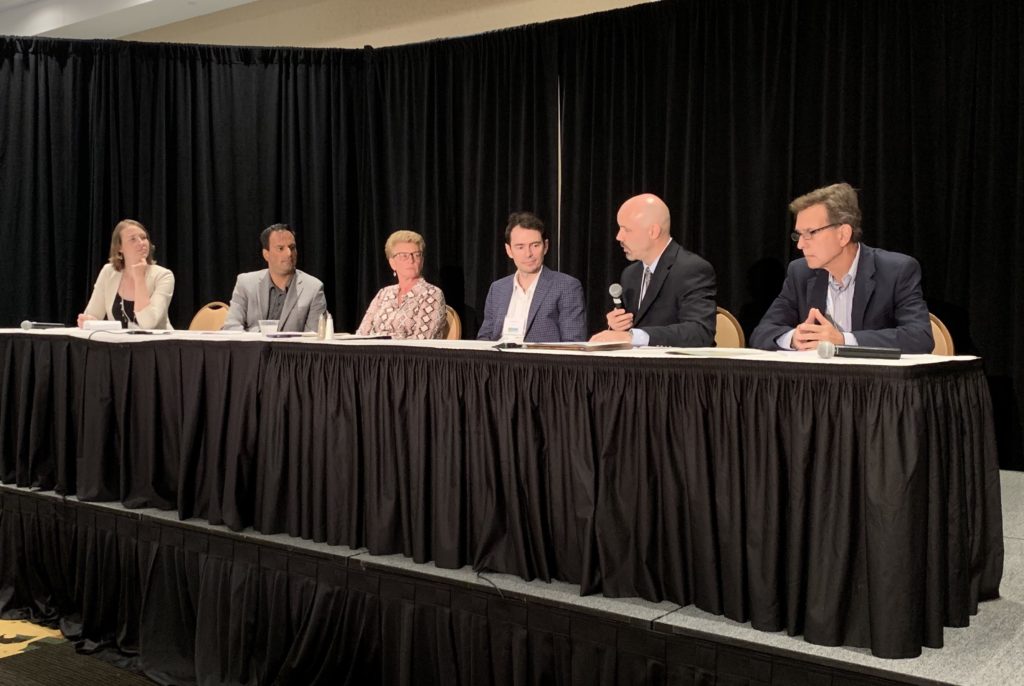 In August, more than 300 attended the third annual Sustainable Fleet Technology Conference & Expo, which highlighted the leading edge of sustainable fleet practices and alternative fuel opportunities, showcasing the latest and greatest technologies in biofuels, electric, natural gas and propane. “It was great to see professionals from different industries and backgrounds coming together to discuss strategies for improving the sustainability of transportation in our state,” said Heather Brutz, Clean Transportation Finance and Operations Manager.

In September, the Clean Transportation team held six National Drive Electric Week events at locations around North Carolina, including ride-and-drives, driver meet-ups and tailgates, to educate the public about electric vehicles. In October, the Transportation team also hosted two Clean Transportation Demonstration Days, supporting Gov. Cooper’s Executive Order 80 and giving government entities across the state information and experience with clean transportation technologies – both in the classroom and on the racetrack. 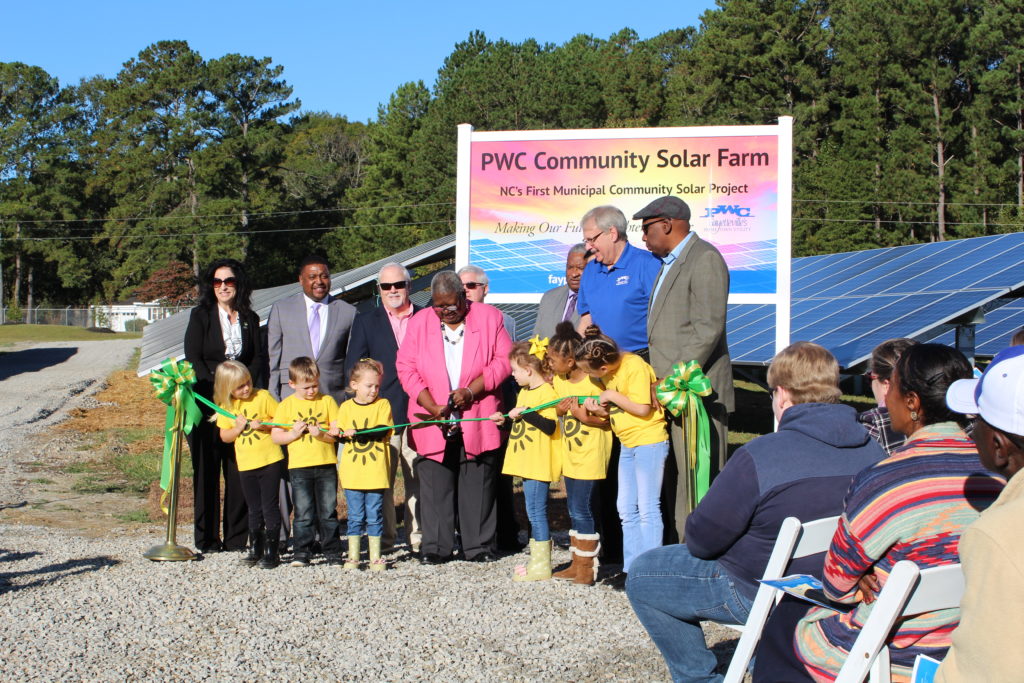 In October, the Fayetteville Public Works Commission unveiled its new 1 megawatt community solar farm of 3,400 solar panels, at the Butler-Warner Generation Plant in Fayetteville, NC. The large-scale, ground-mount solar array is the first municipal utility community solar project in North Carolina. NCCETC provided a technical and economic analysis for the community solar project, including a 560 kW battery, to help the municipal utility consider the viability, costs, and value of the renewable energy in an effort to diversify their generation portfolio. “Community solar is an opportunity for Fayetteville customers to benefit from renewable energy without the risk, including the operation and maintenance costs often associated with rooftop solar systems,” said Kimberly Conley, NCCETC Senior Project Manager. “The community solar model allows customers to invest directly in the future of solar energy as a more sustainable option, long-term.” 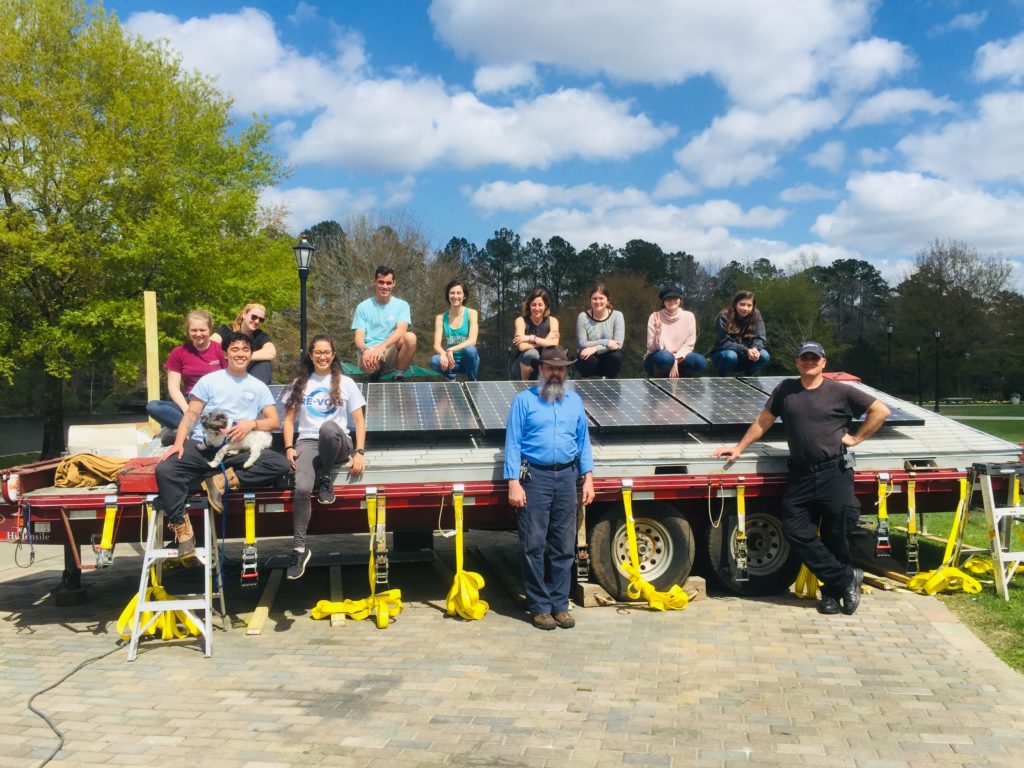 The Customer Rate Comparison Tool was also launched in March 2019, a service for electric utilities and energy providers that can inform customers about new electric rates, energy efficiency options, energy use of home appliances and other factors that affect energy bills.

The 50 States of Solar, Grid Modernization and Electric Vehicles reports were all released quarterly in 2019. These products are all included in DSIRE Insight and are available for purchase. An Executive Summary is available for free.

Toward the end of 2019, North Carolina received a $300,000 competitive award from the U.S. Department of Energy for a joint project by the N.C. Department of Environmental Quality (DEQ), UNC Charlotte’s Energy Production Infrastructure Center (EPIC), and NCCETC. The two-year project, “Planning an Affordable, Resilient, and Sustainable Grid in North Carolina,” will include opportunities for interested stakeholders to review the metrics developed by the research team and to provide input into an advanced grid scenario focused on enabling a more decentralized resilient grid, including micro/mini grids that can support critical services, such as hospitals, in the case of power outages. 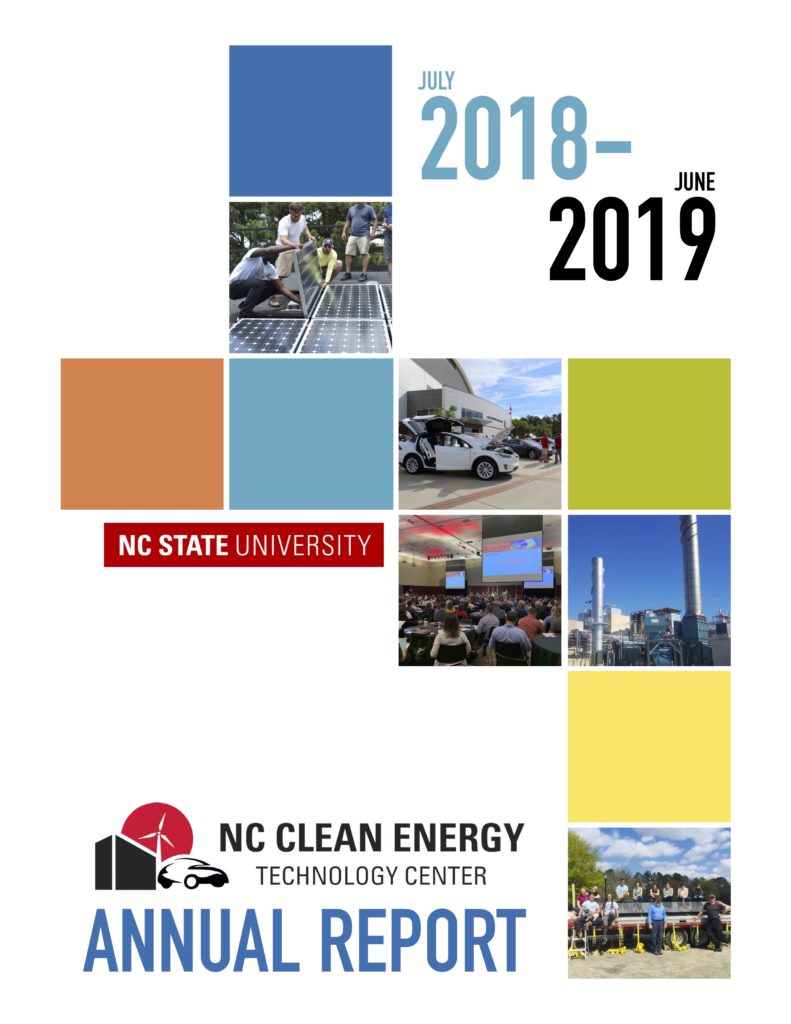 For a look at our most recent fiscal year accomplishments, review our 2018-2019 Annual Report, which covers NCCETC’s major projects from the last fiscal year along with operating budget statistics and highlights.

These are a few of the highlights that made 2019 a great year at NCCETC! The Center looks forward to more exciting projects and partnerships in 2020!

August 23-25 class dates will be held in-person in Raleigh, NC. Course will take place from 8:30 am – 5:00 pm at NC Clean Energy Technology Center offices at NC State University. This 40-hour program covers renewable energy technology applications and solar fundamentals (with an eye towards the business side of it), policies that create […]

The bulk of this 40-hour workshop covers topics relating to the National Electrical Code® (NEC) requirements for PV systems and prepares the participant for proper code compliance, wire sizing, equipment specifications, permit processing, commissioning and other necessary steps in the design and installation phases of residential and commercial systems. This 6-week online course covers the […]