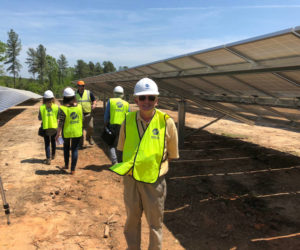 Clifton, who completed the Renewable Energy Technology Diploma Series at  NCCETC by taking REPV: Fundamentals of Photovoltaic Design and Installation, REPVA: Advanced, and CREM: Certificate in Renewable Energy Management, is a computer science professor at Rowan-Cabarrus Community College, and lives on a farm outside of Salisbury, NC, with his wife and two daughters.

Since 2007, Clifton has heated his family’s home with a biomass furnace that burns corn kernels – and uses evacuated tube solar thermal to heat their water. He owns two solar arrays made up of 12 photovoltaic (PV) panels and 12 micro-inverters. And, Clifton and his wife Kathryn drive Chevrolet Volt plug-in hybrid electric vehicles (PHEVs) daily. They have been driving electric since 2012.

Among his many accomplishments, Clifton also helped with the initial draft of the solar ordinance for Rowan County. He created a solar power production plug-in for WordPress that has been installed at over 118 solar installations in 17 countries. And, Clifton’s renewable energy facility for solar thermal was number 20 in North Carolina – at the time he started net-metering solar PV, it was one of only forty sites in North Carolina.

“Over the last twelve years I have been blessed to be able to share some of what we have done in presentations on biomass, sustainable communities, going green and solar classes,” Clifton said. 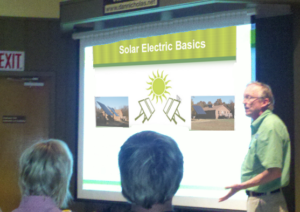 Clifton said NCCETC’s training classes have been helpful for his own experience, as well as for teaching subjects himself.

“[NCCETC classes] were a tremendous benefit to get a larger perspective on the industry, and also prepared me to pass the North American Board of Certified Energy Practitioners (NABCEP) PV Associate exam. Aside from the wide perspectives and knowledge gained, they are great opportunities to network with industry leaders, and peers in the renewable energy field,” Clifton said. “That background would be a big help with my involvement in helping to create the solar ordinance for Rowan County, teaching going-green classes, solar thermal and solar PV classes.”

For Clifton’s CREM project at NCCETC, with power purchase agreement (PPA) prices falling, Clifton explored other ways to achieve a better rate of return on PV investments. He focused on building solar-powered electric vehicle charging stations, but with a twist – using the excess energy to mine digital currency. He developed a model where an equivalent PPA price was projected out over a three year period.

“The CREM project was a great opportunity to think outside of the box,” Cliton said. “There were a lot of inputs into the model, but it was really rewarding to see the projections run.”

What Clifton enjoys most, he said, is being able to share with his students. He loves being able to integrate solar and EV related material into his computer science projects at the college, which let students examine those ideas in places they otherwise wouldn’t think of them.

“Often having children forces parents to think about the future. What kind of world are we going to leave them? How will we be remembered?” Clifton said. “As a professor I get a lot of opportunities to share stories.”