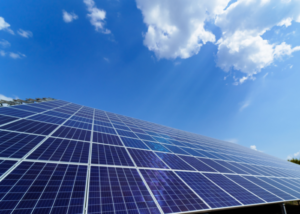 ARPA was passed in March 2021 to provide direct relief to Americans, contain the COVID-19 virus and rescue the economy. The North Carolina Department of Health and Human Services (NCDHHS) was a direct recipient and, according to their website, ARPA funds will be used to strengthen current health and human services-related programs and invest in new programs. 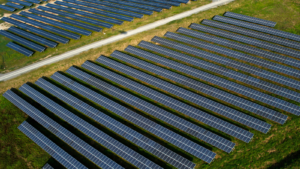 Previous work by the NCCETC has shown community solar to be a viable program model for participation in North Carolina’s solar economy. From 2017-2020, NCCETC led the Community Solar for the Southeast Project, part of the U.S. Department of Energy’s Solar Energy Evolution and Diffusion Studies – State Energy Strategies (SEEDSII-SES) funding program. The project team conducted technical assistance for nine cooperative and municipal utilities in the Southeastern US, evaluating the feasibility of community solar and energy storage facilities. 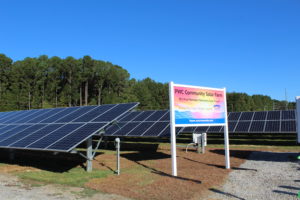 The successful deployment of the Fayetteville Public Works Commission (PWC) Community Solar Program shows that a community solar program coupled with energy storage could be a financially viable opportunity for similar utilities to consider.

Through the Community Solar Program, customers pay a monthly subscription fee, and in exchange, receive a bill credit for the value of the solar less the cost to operate. All Fayetteville electric customers – whether owning or renting and whether residential or non-residential – can participate as a ‘subscriber’ in the program. 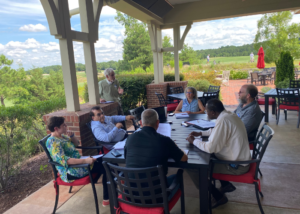 “Community solar programs can alleviate some of the obstacles for those who can’t afford or aren’t able to install solar on their own homes and businesses,” according to Potter, “But there’s still limited policy support and limited subscription availability across the Southeast.” 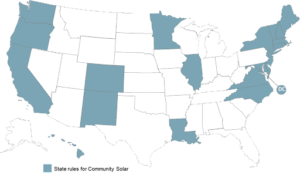 Potter stated, “As part of the ARPA project, we researched low and moderate-income customer targets, carve-outs, and funding mechanisms for community solar programs throughout the United States.” The Database of State Incentives for Renewables and Efficiency (DSIRE) lists 21 states with rules allowing or requiring utilities or other entities to develop community solar programs.

The Community Solar Access for Low and Moderate-Income Utility Customers project builds on previous work by taking direct action to support more community solar subscriptions. In the project’s second round, the funding aimed to broaden the spectrum of beneficiaries and foster development of self-sustaining subscription support programs by encouraging applicant utilities to use the funds received to complement replicable lower-income support programs developed by the utilities themselves and funded using non-government sources. 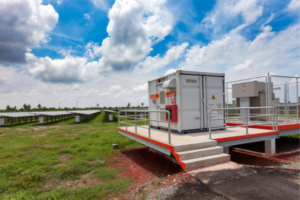 In collaboration with Cliburn & Associates, NCCETC completed initial analysis for community solar and community plus storage for three NC municipal utilities to investigate the effects of battery storage to project and program economics.The addition of battery energy storage to a solar system can provide an additional value stream that could improve project economics.

As part of this project, the team developed the Solar-Plus for Electric Cooperatives Early-Stage Decision Model, which allows for analysis of multiple value streams that can be garnered from solar-plus-storage projects including peak-shaving, ancillary services, distribution deferral, and resiliency value. Cliburn & Associates and NCCETC adapted and updated this model for use with community solar projects and is using the model to analyze possible community solar and energy storage projects for utilities in North Carolina. 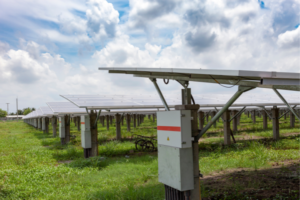 NCCETC also completed research into different subscription models and current and emerging best practices on community solar program design for low-income participants. For example, employing an opt-out community program may be one solution to overcome the information barriers to lower-income participants. Opt-out programs automatically enroll customers while providing the option to cancel subscription if desired.

Carolina Solar Services, LLC has joined NCCETC to support analysis of the potential for repowering existing photovoltaic arrays with new modules for increased generation and new inverters for increased up-time, among other repowering strategies. The goal of this area of the project was to evaluate the potential to expand the capacity of existing community solar arrays interconnected to the distribution infrastructure of rural electric cooperatives in North Carolina.

Using engineering principles and best analysis, Carolina Solar Services constructed a model for expected output of the array under current conditions as well as under two scenarios: replacing the 315 watt seven-year-old panels with new panels of the same capacity, and replacing the panels with new panels of a larger capacity but the same dimensions to minimize site construction costs. Based on recommendations from a preliminary report from Carolina Solar Services, NCCETC studied the incorporation of battery storage, to understand the potential to replicate and scale a pilot initiative statewide. 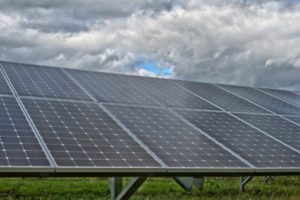 Recently, investor-owned utilities in some regions of the United States have begun offering “Community Resiliency” programs wherein a commercial-scale customer (often a school, church or community center) hosts utility-owned solar-plus-storage system, which can provide economic and resilience benefits for the customer, the utility and the surrounding community.

The initial solar and storage modeling results with opportunities for resiliency through community solar microgrids was presented in the second workshop hosted in September 2022. Based on data provided by Roanoke EC, the team identified and planned outage scenarios to meet power requirements and resilience needs at 100 percent and 75 percent loads.

“There’s still a lot of work to be done to create scalable solutions to expand community solar, but projects like these help set the stage for small electric utilities to explore their options for creating accessible programs for all customers,” Bowen said.

Stay tuned for an upcoming webinar featuring NCCETC’s developed models and tools for community solar best practices to increase benefits that can be shared between the utilities and customers to provide greater annual cost savings.