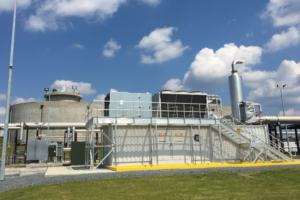 In a webinar last month, stakeholders and end-users came together to discuss the role that combined heat and power (CHP) has in advancing sustainable and resilient wastewater treatment plants in Florida and across the region.

The webinar – Operating Sustainable and Resilient Wastewater Treatment Plants with Combined Heat and Power – was hosted by the U.S. Department of Energy (US DOE) Southeast Combined Heat and Power Technical Assistance Partnership (CHP TAP) based at the NC Clean Energy Technology Center (NCCETC) at NC State University and the full recording is available here. 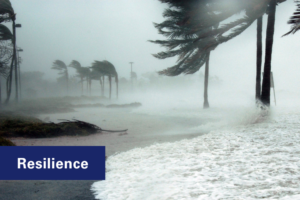 Wastewater treatment plants (WWTPs) are an integral part of a county’s or municipality’s critical infrastructure to ensure safe and effective treatment of wastewater. The ability of these facilities to operate, especially during severe weather events, is essential to the environmental and human health and safety of the communities these plants serve. As Elizabeth Bowen explained, “Combined heat and power has the ability to provide resilient, low carbon energy for the safe operations of these facilities, even during times of electric grid outage.”

Elizabeth Bowen is a Senior Project Manager for NCCETC’s Clean Power and Industrial Efficiency Program (CPIE) and moderated the webinar session. She was joined by Art Samberg of the Southeast CHP TAP, Sean White from the Florida Office of Energy, Jason Grant from the Miami-Dade County Office of Resilience, and Will Rice from Charlotte Water.

Art Samberg is Assistant Director of the Southeast CHP TAP and a Program Director on the NC Clean Tech Center’s CPIE team. He presented on the overall benefits of CHP, particularly at critical infrastructure sites, and the technical assistance available through the Southeast CHP TAP for facilities considering a CHP project for their site. 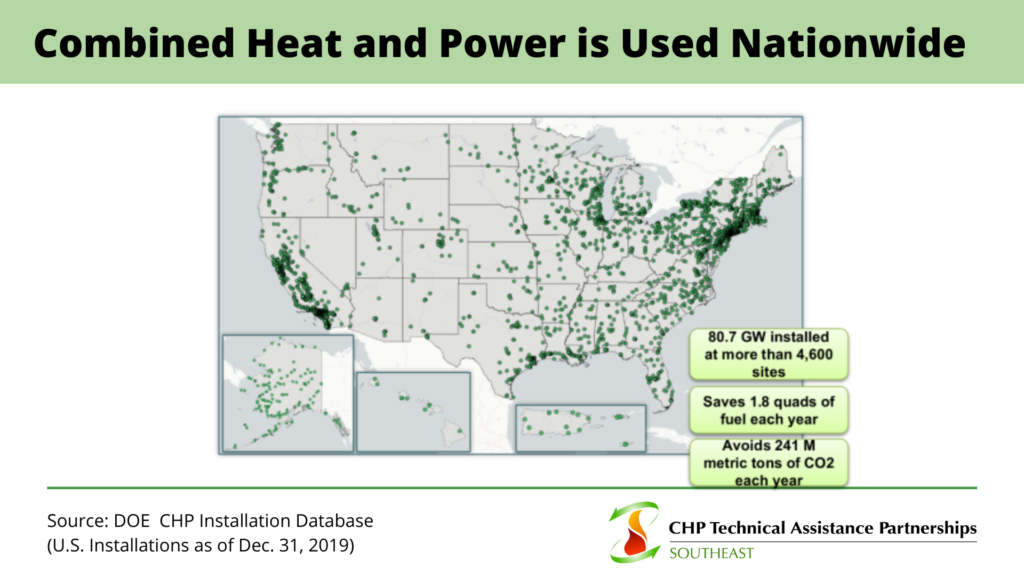 The Southeast CHP TAP provides education and no-cost technical assistance to energy end users interested in the benefits of CHP.  Our technical assistance includes CHP screenings to help facilities determine if their sites are a good candidate for CHP, that is, a site where a CHP system would provide the appropriate level of energy and cost savings to help facilities operate more efficiently and with greater energy resilience.  The CHP TAPs also offer a suite of “Advanced Technical Assistance” including CHP decarbonization estimates, information on financing options and applicable incentives, third-party reviews of engineering studies, equipment specifications, investment-grade analyses and commissioning plans.  As previously mentioned, all of the technical assistance offered by the CHP TAPs are at no-cost to the energy end user. As leading experts in CHP, including waste heat to power, microgrids and district energy, the CHP TAPs have the knowledge and resources to support facilities from the initial CHP screening through commencement of system operation.

“If you have multiple facilities around the country, we also work collaboratively with the other nine CHP TAPs to help your organization across the US states and territories,” Samberg added. More information about the DOE’s CHP TAPs across the United States can be found online through the Better Building Initiative website. 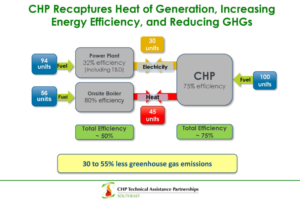 CHP, or cogeneration, captures heat that would otherwise be wasted to provide useful thermal energy for heating or cooling from a single fuel source. This energy efficient process of generating electricity is one of CHP’s primary benefits in addition to reducing carbon emissions compared to the less efficient production of electric and thermal energy separately.

Samberg shared how existing applications of CHP in the United States currently avoid more than 1.8 quadrillion Btus of fuel consumption and 241 million metric tons of carbon dioxide compared to the separate production of electricity and thermal energy, and the potential for greater adoption of CHP still exists. CHP captures waste heat produced by existing systems, such as boilers, to provide both electricity and thermal energy (or hot water) at overall efficiencies that are at least 25 percent greater than traditional production of thermal energy and utilization of electricity from the utility power grid.

Residential, commercial, municipal, industrial and institutional facilities can benefit from CHP’s ability to be a cost-effective source of energy that meets  resiliency needs. “a CHP system that is configured to switch to ‘island mode’ will automatically disconnect from the grid and provide energy to your facility so that you have a continuous source of energy no matter what’s going on outside,” Samberg said. 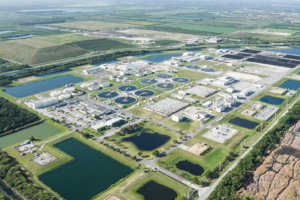 CHP Case Studies and Its Potential in Florida

Currently, only five wastewater treatment plants in Florida have CHP systems, with a total capacity of 15.1 MegaWatts (MW), Samberg stated. According to the DOE’s CHP Technical Potential study, Florida has an additional 19 MW of WWTP technical potential at 35 sites across the state. This represents a substantial opportunity for counties and municipalities to reduce energy consumption, advance sustainability goals while at the same time creating a resilient source of energy to operate a critical infrastructure facility.

Sean White, a Senior Management Analyst with the Florida  Office of Energy, discussed the ongoing wastewater facility energy efficiency program, as well as the importance of energy security at facilities such as WWTPs.

The University of Florida published a study in 2020, Mapping the Energy Landscape of Water and Wastewater Treatment Plants in the State of Florida, supported by the DOE’s Office of Energy Efficiency and Renewable Energy. “The study examined energy efficiency at water and wastewater treatment plants and was able to produce a baseline on measures, and provided specific information on how to reduce energy use and operating costs,” noted White. 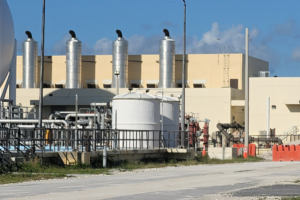 The Miami-Dade Water and Sewer Department (MDWASD) serves nearly 2.3 million residents, making it the largest waste and sewer utility in the Southeastern United States. The MDWASD is a water and wastewater treatment county utility that utilizes biogas for CHP and has been using CHP for more than two decades.

Biogas is produced via anaerobic digestion at two of its facilities with a total cogeneration capacity of 12.8 MW, of which 3.2 MW was installed for resiliency to protect against downtime. To sustain a continuously renewable fuel cycle, waste heat from the reciprocating cogeneration engines is then used onsite for anaerobic sludge digestion.

In his presentation, Grant noted MDWASD first implemented a 2.7 MW reciprocating engine system with CHP in 1991 for cost savings. CHP has made MDWASD more resilient by protecting against downtime and outages, cutting energy costs, creating redundant energy sources, and reducing its carbon footprint. 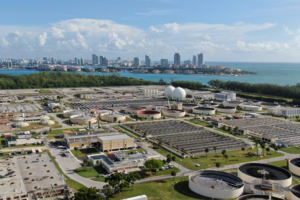 In 2015, MDWASD funded a multi-year Biogas Optimization Capital Improvement Project to maximize CHP utilization through the interconnection with the local electric utility, expansion of CHP capacity, and the use of landfill biogas. After the expansion, the utility’s south district plant capacity increased to 8 MW. The new CHP system was implemented to meet three main goals: resiliency, sustainability, and economics. Grant further highlighted that these systems result in approximately $300,000 per month of energy savings for Miami-Dade County.

The webinar concluded with an overview on financing through the Clean Water State Revolving Fund (CWSRF) from Will Rice, a Project Manager for Charlotte Water. Charlotte Water operates seven wastewater treatment plants, including their largest, McAlpine Creek Wastewater Management Facility (WWMF). Located in Pineville, NC, this facility has a daily treatment capacity of 64 million gallons per day. 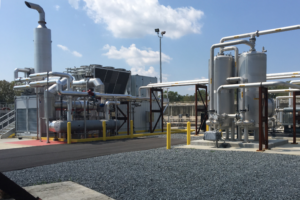 Charlotte Water applied for and was awarded a $3.2 million, 20-year 0 percent interest loan under the Green Project provisions of the CWSRF to support development of the McAlpine WWMF CHP plant. This loan covered approximately 70 percent of the $4.6 million total project installed cost resulting in a payback of less than 13 years.

Additionally, the Southeast CHP TAP provided technical support to the utility during the planning phases of the project by conducting a CHP Qualification Screening and a Feasibility Analysis. The facility is now considering the addition of a second CHP system with plans to increase CHP capacity to 2 MW.

Rice suggested doing an ample amount of research including visiting facilities that have CHP applications and asking questions of the facility managers. By gaining an understanding of the operations and maintenance, as well as the capital expenses, the team was able to successfully manage expectations of leadership and stakeholders alike.

If you’re interested in learning more about what CHP can do for you, please contact the Southeast CHP TAP Director Isaac Panzarella at ipanzarella@ncsu.edu.

About the U.S. DOE Sout