The SPECs project is part of the U.S. Department of Energy’s (DOE) second round of the Solar Energy Innovation Network, a program that supports multi-stakeholder teams pursuing new applications of solar energy and other distributed energy resources. 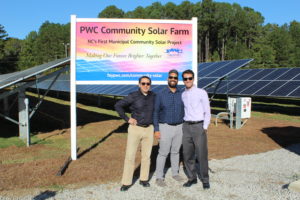 Cliburn and Associates has worked with electric co-ops and municipal utilities in the past, especially in projects such as the Community Solar Value Project, of which SPECs is an evolution. The SPECs team also includes energy industry consultants with decades of experience in the solar industry, including solar-plus-storage and other projects with electric cooperatives.

Simon Sandler, one of the grant team members and Clean Power & Industrial Efficiency Project Engineer at NCCETC, worked in tandem with another engineer, Christian Casillas, and the SPECs team to develop the early stage decision (ESD) model. This model is a tool for distribution utilities, such as electric cooperatives and municipalities, in early stage exploration, to explore the costs and benefits associated with deploying a solar and storage project.

“Many utilities are interested in exploring solar and storage together, but are not sure of the technical capabilities nor the potential economic benefits they can provide,” Sandler explained. “The model makes this exploration and project development task easier by providing battery operation assumptions for specific value streams and value stacks.”

SPECs and other applied research and development projects like it are working to reduce policy barriers to solar-plus storage projects at cooperatives. David Sarkisian, Senior Policy Project Manager at NCCETC, helped the SPECs project team assemble a library of requests for proposals (RFPs) used by electric cooperatives and other utilities to procure energy storage systems and create a guidance document for cooperatives to use when creating their own RFPs.

This year, Sarkisian wrote a white paper on the institutional and policy factors that affect electric cooperatives that want to deploy energy storage. The paper, which will be published later this month, evaluates how the relationship between local co-ops and the wholesale generation and transmission cooperatives that serve them are changing so that storage can become a flexible grid resource and part of a renewable energy integration strategy. The paper also examines the state, federal and regional policies that impact solar-plus-storage development.

“Support from SPECs and other projects, like NCCETC’s Community Solar for the Southeast project, let these smaller utilities explore new program ideas, and possibly create beneficial new offerings for their customers/member-owners,” Sarkisian explained.

For those who cannot, or prefer not to, install solar panels on their own homes and businesses, community solar enables them to still directly benefit from solar energy. Member-owners of the local co-op are able to use the power generated by the panels, often less expensive on a per-unit basis than residential-scale solar.

“NCCETC’s involvement with community and community-scale solar has helped to identify opportunities for community solar to provide net benefits to both utilities and solar subscribers, playing a part in the transformation of community solar from a niche concept to a major market, even in regions without extensive policy support,” Sarkisian said.

Learn more about the SPECs project here. Utilities and community partners can find an array of resources on Cliburn and Associates website under the “Solutions” tab on their website.

Stay tuned for more resources including the policy report and the final model and user manual on NCCETC’s website.