With 2021 in its last quarter, clean energy has been at the forefront of state legislative action in the United States. So far, hundreds of clean energy related bills have already been enacted, and NC Clean Energy Technology Center’s Database of State Incentives for Renewables & Efficiency (DSIRE) team hosted a webinar on September 16, 2021 to review major state legislative action of the last three quarters. The webinar recapped major trends as well as pending and passed bills related to clean energy including net metering, community solar, renewable energy and clean energy standards, energy storage, electric vehicles and more.

In the first two quarters of 2021, 43 states and the District of Columbia took some type of distributed solar policy action, according to the Q1 2021 edition and Q2 2021 edition of The 50 States of Solar. The greatest number of actions addressed net metering policies, community solar policies and residential fixed charge or minimum bill increases. 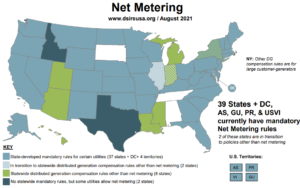 As of August 2021, DSIRE includes information on mandatory net metering rules from 39 states and the District of Columbia. For electric customers who can generate their own electricity, net metering allows for the flow of electricity both to and from the customer. This enables the customer to use excess generation to offset electricity they would otherwise have to purchase at the utility’s full retail rate.

Oregon, which established its RPS in 2007, committed to 100 percent clean energy sources by 2040 with the passing of H.B. 2021. These tangential requirements complement the existing RPS, encouraging a wider variety of carbon neutral technologies to participate while replacing the need for electricity generated by fossil fuels.

Legislation Paving the Road Ahead for Electrification 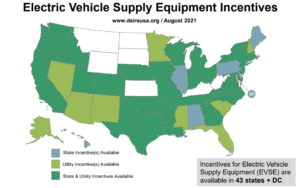 Over 250 incentive programs for the purchase of EVs and associated charging infrastructure are currently available on DSIRE, with incentives for electric vehicle supply equipment available in 43 states and D.C. DSIRE has documented 86 bills related to EVs that were enacted in just this year, with almost every state taking at least one action according to Lips.

In 2021, several states have also enacted lead-by-example policies to direct state agencies to pursue energy efficiency and sustainability practices focused on fleet electrification.New legislation in Connecticut requires at least 50 percent of new light-duty vehicles and 30 percent of new busses purchased by the state must be zero-emission vehicles (ZEVs) starting in 2030.

“Hawaii adopted a similar policy, but with a much tighter timeline- starting next year, 100 percent of new light-duty vehicles purchased by the state must be ZEVs,” Lips added. Additionally, all state-owned vehicles must be swapped out with electric vehicles by 2035 under Hawaii’s H.B. 552. 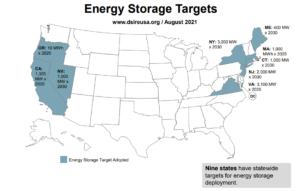 Utility business model reform has been another hot topic among state legislatures, with several states considering joining a regional transmission organization (RTO). Nevada passed a bill requiring the state to join a RTO by 2030, while the Oregon Legislative Assembly enacted a bill initiating a study of the benefits, opportunities, and challenges posed by the development or expansion of an RTO in the state.

ABOUT THE DATABASE OF STATE INCENTIVES FOR RENEWABLES AND ENERGY EFFICIENCY:

DSIRE is the most comprehensive source of information on incentives and policies that support renewable energy and energy efficiency in the United States. Established in 1995, DSIRE is operated by the NC Clean Energy Technology center at NC State University. If you’re interested in learning more about incentives and policies for renewable energy and energy efficiency in your state, visit DSIREusa.org.

The NCCETC is now offering Energy & Sustainability Services (ESS) to all types of private and public organizations. Our staff are subject experts in clean energy, transportation, policy and workforce development and they bring this entire portfolio of knowledge toward a holistic approach to client work. They also provide unbiased, data-driven, and technical fee-for-service energy solutions based upon the client’s specific needs.

Register for our newsletter to stay tuned for the next free webinar highlighting timely topics and services!