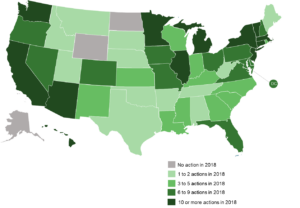 The report highlights ten of the top electric vehicle trends of 2018:

“The most active states of 2018 were engaged in a variety of actions to encourage electric vehicle adoption and charging infrastructure development,” said Allison Carr, Clean Transportation Specialist at NCCETC. “Many of these states are conducting statewide planning initiatives and involving a full spectrum of stakeholders to remove barriers and dedicate resources to transportation electrification.”

A total of 424 electric vehicle actions were taken during 2018, representing an 87% increase over 2017. The report notes the top ten states taking the greatest number or most impactful actions in 2018 were:

“One of the biggest issues under consideration in 2018 was regulatory jurisdiction over electric vehicle charging infrastructure,” noted David Sarkisian, Senior Policy Analyst at NCCETC. “Several states issued decisions regarding Commission authority over third-party owned and operated charging stations, as well as utility ownership of charging infrastructure.”