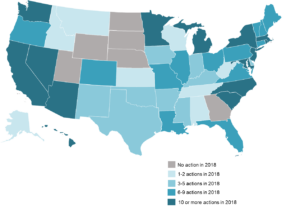 The report highlights ten of the top grid modernization trends of 2018:

“At least 36 states considered actions related to energy storage in 2018, highlighting the key role of distributed energy resources in grid modernization,” said Achyut Shrestha, Project Manager at NCCETC. “States took a variety of actions related to storage in 2018, from efforts to study and plan for storage deployment to establishing procurement targets and incentives in order to drive the market forward.”