Raleigh, N.C. – (February 7, 2018) The N.C. Clean Energy Technology Center (NCCETC) launched its new report series, The 50 States of Electric Vehicles, with a special 2017 Review issue. The new series, which will take the form of quarterly reports beginning with Q1 2018, provides insights on state regulatory and legislative discussions and actions on electric vehicles and charging infrastructure. 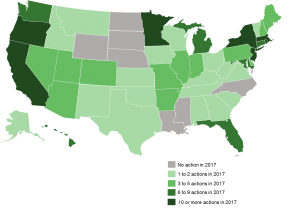 “As projections for the number of electric vehicles sold continues to rise, we see many states taking pre-emptive steps to help facilitate and prepare for this transition,” noted Heather Brutz, Clean Transportation Program Manager at NCCETC. “This includes directly funding vehicles and infrastructure, streamlining the permitting process, and preparing for a transportation funding future where gasoline-powered vehicles make up a smaller percentage of vehicles on the road.”

“As states and utilities undertake grid modernization efforts, electric vehicles are consistently being included in these discussions,” said Autumn Proudlove, Manager of Policy Research at NCCETC. “Key issues under consideration in 2017 were utility rate design for electric vehicle charging and the role of utilities in deploying charging infrastructure.”

Topic: Power Material Handling Technology Are your operational decarbonization and electrification strategies including material handling equipment? This webinar will cover the new power sources for material handling technology including lithium-ion batteries and hydrogen fuel cells. Speakers will also cover transitioning from fossil fuel based to electrified equipment with consideration for maintenance differences. Presenters and Panelists include: Trevor […]

Please mark your calendars for the Tenth Annual North Carolina Renewable Ocean Energy Symposium, scheduled for Monday and Tuesday, May 24 and 25, 2021. The Symposium will be held virtually. The Symposium agenda is still under development, but the current plan is to hold closed review sessions between researchers and the NCROEP Technical Advisory Committee […]