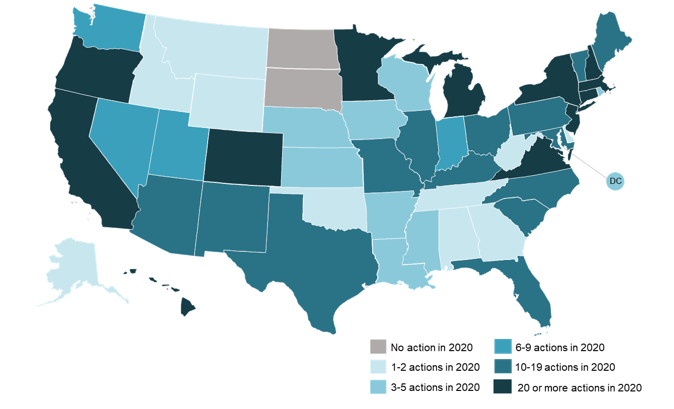 The report highlights ten of the top grid modernization trends of 2020:

“Energy storage deployment was the most common type of grid modernization action for the fourth year in a row,” observed Autumn Proudlove, lead author of the report and Senior Policy Program Director at NCCETC. “We also saw new states adopt energy storage targets and movement toward all-source competitive procurements, which can allow energy storage resources to compete with traditional generation.”

A total of 658 grid modernization actions were taken during 2020, representing approximately an 8% increase in activity over 2019 (612 actions). The report notes that ten of the most active states in 2020 for grid modernization were:

“One of the trends we observed this year was utilities proposing incentives to encourage residential customers to participate in demand response programs,” noted David Sarkisian, Senior Policy Project Manager at NCCETC. “While residential incentive programs in the past have typically focused on technology adoption, these programs compensate customers for enabling direct utility control through devices like smart thermostats and energy storage systems.”