The report finds that 47 states and the District of Columbia took some type of distributed solar policy action during 2018 (see figure below), with the greatest number of actions relating to residential fixed charge increases, net metering policies, and community solar policies. 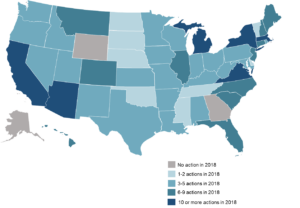 The report highlights ten of the top distributed solar policy trends of 2018:

“The number of distributed solar policy actions has increased every year from 2015 to 2018,” observed David Sarkisian, Senior Policy Analyst at NCCETC. “The complexity of the policies under consideration has also increased as states move to account for temporal and locational value in compensation frameworks and to address the interaction of solar with complementary technologies like energy storage.”

“Distributed solar policy and rate reform continued to sweep the nation in 2018, with nearly every state considering changes,” said Autumn Proudlove, lead author of the report and Senior Manager of Policy Research at NCCETC. “We expect to see even more activity in 2019, as some states consider increasingly intricate policy designs.”