The 50 States of Solar: States Focus on Grid Benefits and LMI Customer Access in Distributed Solar Program Design During 2022

The report finds that 46 states and the District of Columbia took some type of distributed solar policy action during 2022 (see figure below), with the greatest number of actions relating to net metering policies, community solar policies, and residential fixed charge increases. The states taking the greatest number of actions Illinois, California, New York, Connecticut, Maine, Colorado, and Michigan. 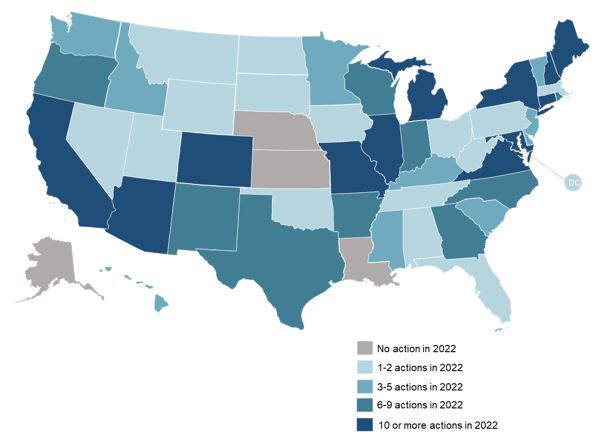 The report highlights ten of the top distributed solar policy trends of 2022:

“2022 was a significant year for low-to-moderate-income (LMI) solar access, following a similar trend from 2021,” observed Justin Lindemann, Policy Analyst at NCCETC. “A plethora of states have committed to incentivizing LMI participation through carve-outs, rebates, as well as billing and tax exemptions. Much of the progress was related to improving community solar engagement. For example, new programs were enacted in New Hampshire and California that prioritize LMI community solar expansion.”

A total of 285 state and utility level distributed solar policy and rate changes were proposed, pending, or decided in 2022. The report notes that ten of the most active states in 2022 for solar policy developments were: