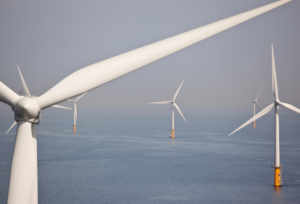 Offshore wind energy has exceptional potential for North Carolina; in fact, the state’s coast has more offshore wind potential than any other state along the Atlantic Coast, according to a report from the U.S Department of Energy, National Renewable Energy Lab. Building the offshore wind industry in NC will provide more than just clean energy, it will also bring an estimated 85,000 new jobs and $140 billion in capital expenditures along the Atlantic Coast by 2035.

Executive Director of the NC Clean Energy Technology Center (NCCETC), Steve Kalland, detailed some of the many opportunities offshore wind development will create in North Carolina. “Manufacturing is where North Carolina’s strength lies,” Kalland said. The state ranks first among east coast states and fifth in the nation in the value of its manufacturing sector’s GDP, something North Carolina can use to foster a thriving domestic supply chain for the offshore wind energy industry. 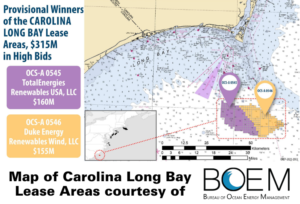 Earlier this month, the Bureau of Ocean Energy Management (BOEM) held an offshore wind auction for two lease areas off the coast of North and South Carolina with winning bids totaling $315 million. Duke Energy Renewables Wind, a subsidiary of Duke Energy, submitted a top bid of $155 million to lease a 55,000-acre site, while TotalEnergies Renewables USA made a top offer of $160 million for a similarly sized area.

The Department of Interior announced the results from the wind energy auction in the Carolina Long Bay area on May 11, 2022. The two lease areas offered cover 110,091 acres and could result in about 1.3 gigawatts (GW) of offshore wind energy, enough to power about 500,000 homes. This auction was the second major offshore wind lease sale this year and a significant milestone towards achieving the Biden-Harris administration’s goal of deploying 30 gigawatts of offshore wind energy capacity by 2030. 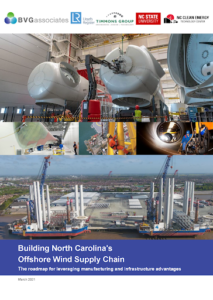 Previously, NCCETC was a member of the Bureau of Ocean Energy Management’s North Carolina Intergovernmental Renewable Energy Task Force that worked to analyze and nominate potential offshore wind lease areas. As part of Governor Roy Cooper’s Executive Order (EO) 80, the North Carolina Department of Commerce commissioned a report, which was researched and produced by BVG Associates and a team of experts from Lloyds Register Energy Americas, Timmons Group, and NCCETC. 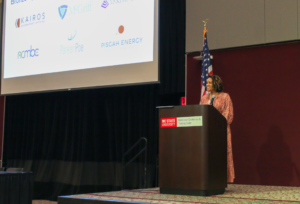 Machelle Baker Sanders, Secretary of Commerce at the NC Department of Commerce, discussed how valuable offshore wind could be for North Carolina at the 2022 State Energy Conference of North Carolina hosted by the NCCETC at NC State University. NCCETC is working with the NC Department of Commerce and other organizations to find ways to advance offshore wind energy projects in the state, with a focus on economic development and job creation. 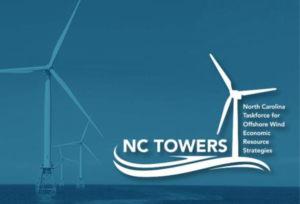 NCCETC recently became a member of the new North Carolina Taskforce for Offshore Wind Economic Resource Strategies, or NC TOWERS. The Taskforce will provide expert advice to Governor Cooper and state policymakers for developing the state’s offshore wind supply chain, workforce, and infrastructure. The Taskforce was established by EO 218 in June 2021, affirming North Carolina’s commitment to offshore wind power as the state transitions to a clean energy economy. 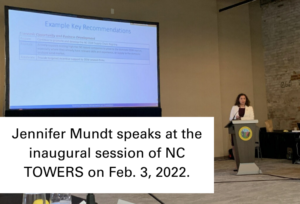 NC TOWERS members began meeting in 2022 and the second meeting was held in Wilmington on May 5. Taskforce staff and members will work together to develop the initial ideas from meeting presentations into final recommendations for the Taskforce’s first annual report which will be delivered to Governor Cooper and the NC General Assembly by June 30th.

EO 218 also establishes offshore wind development goals of 2.8 GW off NC’s coast by 2030 and 8.0 GW by 2040. EO 218 directs actions to help North Carolina secure the jobs and economic development associated with the industry’s estimated $140 billion investment over the next 15 years to develop projects from North Carolina up the Atlantic Coast.

Governor Roy Cooper also signed House Bill (HB) 951: Energy Solutions for North Carolina in October of 2021. The bill sets guidelines for rulemaking and regulatory reform for energy policy over the next decade. HB 951 requires the NC Utilities Commission to take “all reasonable steps” to achieve 70 percent carbon emissions reductions from 2005 levels by 2030 and achieve carbon neutrality by 2050. 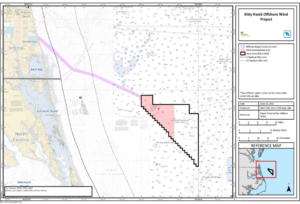 In 2021, BOEM awarded Avangrid Renewables, LLC the state’s first commercial lease area about 40 miles off of North Carolina’s coast. The developer is planning a 69-turbine wind farm for the Kitty Hawk Offshore Wind project, but the energy produced is expected to be exported to Virginia.

More recently, Governor Cooper released his recommended budget for 2022-2023 which included $20 million allocated for infrastructure investment for North Carolina’s Radio Island. The investment is intended to support wind energy-related projects and transform the island into a staging area for wind-energy construction and component shipping.

Even for projects not directly powering North Carolina’s grid, the development, construction, operation and maintenance involved in the supply chain of offshore wind holds great economic potential for the state. “With our manufacturing presence and a highly-skilled workforce behind it, North Carolina is the perfect place for companies looking to grow the offshore wind supply chain,” Kalland noted.

The NCCETC is looking forward to supporting NCTOWERS and the Department of Commerce to foster a thriving offshore wind workforce and business community. North Carolina is taking the lead along with other states in the southeast to propel this billion-dollar industry forward.