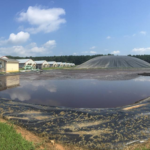 Renewable Natural Gas is a methane-based biogas derived from decomposing organic matter, agricultural waste and other organic sources that is then processed and refined to natural gas quality standards. This pipeline-quality gas is fully interchangeable with conventional natural gas and can be used as vehicle fuel, to generate electricity, in thermal applications, or as a bio-product feedstock.

On March 24, the NC Clean Energy Technology Center (NCCETC) hosted a one-hour webinar featuring a primer on animal waste anaerobic digestion, the decarbonization of the natural gas supply and state and federal policies that incentivize development of RNG projects. The full webinar recording is available to view online, for free as part of NCCETC’s Energy & Sustainability Services Webinar Series. 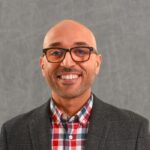 Dr. Mahmoud Sharara, Assistant Professor and Extension Specialist at the NC State College of Biological and Agricultural Engineering, explained how RNG projects can reduce agriculture industry-based greenhouse gas emissions by capturing methane in an anaerobic digester. “We really get a win-win related to anaerobic digestion because it accomplishes two goals- it reduces the greenhouse gas emissions from animal agriculture or waste management in general, but it also creates a renewable energy source,” Dr. Sharara said. By avoiding “business-as-usual” disposal pathways in projects involving the anaerobic digestion of manure and organic wastes, RNG can achieve negative carbon footprints. 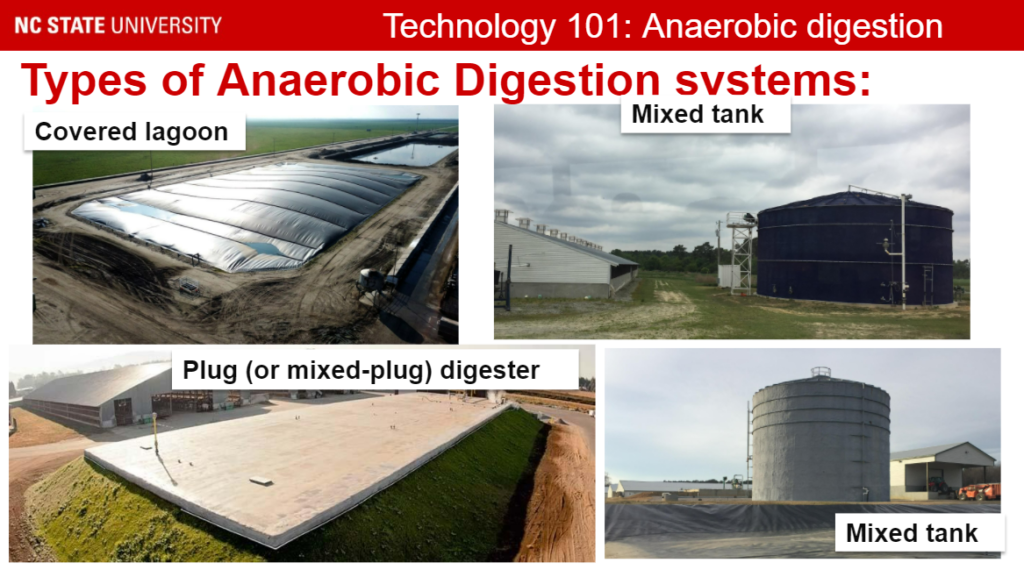 Livestock farms can use an anaerobic digester to convert livestock manure into biogas and digestate (a nutrient-rich material left over after anaerobic digestion). Biogas is naturally produced when microorganisms break-down organic matter in an oxygen-free, or anaerobic process. The biogas created in this process consists of approximately 60 percent methane gas, a potent greenhouse gas with global warming potential more than 25 times greater than carbon dioxide.

Biogas can be combusted to heat water and buildings and as fuel in generators to produce electricity. While raw biogas can be used locally at the site, it must go through a series of steps to be converted into RNG before it can be injected into natural gas transmission or distribution pipelines. The biogas upgrading process significantly reduces the gasses’ moisture and carbon dioxide content while increasing the methane concentration from approximately 60 percent to 96 percent.

Policies Powering RNG Production in North Carolina and Beyond 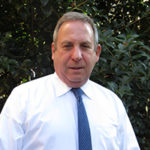 NCCETC’s Clean Power & Industrial Efficiency Program Director, Art Samberg, reviewed three key policies that incentivize the development of RNG projects in North Carolina. The Renewable Fuel Standard (RFS) is a federal program, first created under the Energy Policy Act of 2005, that requires the transportation fuel sold in the United States to contain a minimum volume of renewable fuels in increasing amounts each year.

The U.S. Environmental Protection Agency calculates and establishes the Renewable Volume Obligations (RVOs) for each renewable fuel every year. Obligated parties under the RFS program achieve compliance with these RVOs by obtaining credits called “Renewable Identification Numbers” (RINs), which are generated when a producer makes a gallon of renewable fuel.

In California, the Low Carbon Fuel Standard (LCFS), administered by the California Air Resources Board (ARB), is designed to decrease the carbon intensity of transportation fuels by 20 percent by 2030. The LCFS encourages the production of cleaner low-carbon transportation fuels, thus reducing GHG emissions that cause climate change. Fuels are evaluated by their lifecycle carbon intensity (or CI score) which incorporates all of the GHG emissions associated with the production, transport and use of the fuel.  The CI score equates to the lifecycle GHG emissions per unit of energy produced when utilizing the renewable fuel.

The ultimate value of a given fuel depends upon the particular CI score, as demonstrated by the fuel producer and as approved by the ARB. Based on LCFS-approved RNG fuel pathways, biogas produced from dairy and swine manure result in the lowest CI scores.  As Samberg explained, lower CI scores mean that the lifecycle GHG emissions are relatively low per unit of energy produced from the fuel.  Lower CI score fuels generate the highest value LCFS credits. The lifecycle analyses conducted for the LCFS demonstrate that RNG produced from organic animal waste achieves a negative carbon intensity score through the combination of fuel pathways that replace the consumption of fossil fuels.

North Carolina adopted the Renewable Energy and Energy Efficiency Portfolio Standard (REPS) in 2007, mandating that utility companies meet 12.5 percent of their energy needs by utilizing renewable fuels or through energy efficiency measures. One unique aspect of the North Carolina REPS is that it created carve-outs for specific technologies including solar and wind and specific fuels such as those produced from swine and poultry waste. Compliance with the REPS is achieved by generating or purchasing Renewable Energy Certificates (RECs), equivalent to 1 MegaWatt hour (MWh) of electricity derived from a renewable energy source. The REPS compliance schedule has been amended several times by the NC Utilities Commission. The most recent order filed in March 2022 requires 0.2% of energy recovery from swine waste by 2026 and 900,000 MWh of energy recovery from poultry waste by 2023.

“There aren’t any other renewable portfolio standards in the country that provide carve-outs for animal waste derived fuels, so that was a very smart way to incentivize the growth of the industry,” said Samberg before adding, “which I think we’re just starting to really see accelerating now.” 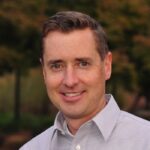 David Nestor, Director of Compressed Natural Gas at Piedmont Natural Gas, discussed RNG projects currently operating in North Carolina, as well as considerations for developers interested in producing RNG that will be transported and used in the state’s natural gas pipeline system.

“In North Carolina, there is a gas quality standard as part of our tariff,” Nestor said. “And there’s also third party gas quality testing that’s required to make sure that the RNG that’s being put on the system does meet pipeline quality standards.”

Liz Bowen from NCCETC moderated the webinar and encouraged interested parties to reach out for more about RNG developments in North Carolina and beyond. “North Carolina is perfect for RNG,” Bowen explained, “The gas could be made and used without leaving the state, which benefits the environment and helps expand the clean energy economy in NC.”

If you’re interested in learning more about North Carolina’s biogas resources, you can reach out to Liz Bowen by emailing her at etbowen@ncsu.edu. To find more information on policies and incentives for renewable energy on the state and federal level, visit NCCETC’s Database of State Incentives for Renewable and Efficiencies at https://www.dsireusa.org/.