The NC Clean Energy Technology Center (NCCETC) partnered with Cliburn and Associates, LLC on the Solar-Plus for Electric Co-ops (SPECS) project to help optimize the procurement and operations of battery storage projects at local electric cooperatives.

NCCETC’s Clean Power & Industrial Efficiency team worked with the SPECs team to develop the early stage decision model. The model serves as a tool for distribution utilities, such as electric cooperatives and municipalities, to explore the costs and benefits associated with deploying a solar and storage project. 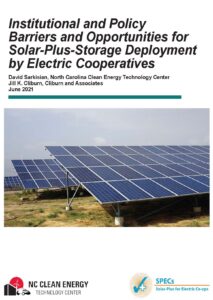 David Sarkisian, Senior Policy Project Manager at NCCETC, also wrote a white paper for SPECs on the institutional and policy factors that affect electric cooperatives that want to deploy energy storage. The paper examines state, federal and regional policies that impact solar-plus-storage development and evaluates how storage can become a flexible grid resource and part of a renewable energy integration strategy.

The potential of solar-plus-storage as a flexible grid resource was also supported by a study conducted by researchers at North Carolina State University (NC State) and North Carolina Central University. Their paper, which appears in the journal Renewable Energy, found a power system with combined energy storage and solar power generation increases a system’s ability to handle peak energy demand. 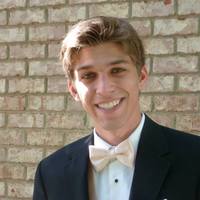 “Installing solar and storage concurrently gives both resources a greater value than the sum of their parts,” said Daniel Sodano, first author of the paper, “The Symbiotic Relationship of Solar Power and Energy Storage in Providing Capacity Value.”

Sodano became a part of the research team during his time as a graduate student in NC State’s Environmental Engineering Department. While attending NC State, he also volunteered as an intern for NCCETC’s Clean Power and Industrial Efficiency program and supported various projects including the U.S. Department of Energy’s Southeast Combined Heat and Power Technical Assistance Partnership.

“The study provided quantifiable evidence for the real value of solar and storage,” Sodano explained. To estimate the capacity credit of solar PV and storage in tandem, researchers used a loss of load probability model to identify the amount of additional load that can be served on a grid by each technology while also taking any constraints and variables into consideration.

This method was applied to test power systems in the Carolinas to assess issues related to power system reliability under high penetrations of variable renewable energy. With the model, researchers estimated the capacity credit of solar photovoltaics (PV) and energy storage in isolation and in tandem to understand the potential of the synergistic effects.

“North and South Carolina were really good case studies for research like this because, in the past couple years, their grid has shifted from a summer peaking system to a winter peaking system, which is due in part to the influx of solar installations,” Sodano said.

The study found that the season in which the peak net load occurs plays an important role in the capacity value of solar PV, with solar PV generation aligning better with the summer peak. At the same time, researchers found that the introduction of energy storage effectively reduces the winter peaks, shifting the system back to a summer peaking system.

The dispatchability of energy storage allows it to discharge during peak net loads, but because it is energy-limited, the maximum duration of discharge limits its capacity value. Combined with solar PV, however, the solar generation shortens the duration of the peak net load, allowing the energy-limited storage to better reduce the remaining peak, and exhibiting the symbiotic relationship of solar PV and storage used in tandem.

The study found that solar PV and storage used together make a more significant contribution to system reliability: as much as 40 percent more of the combined capacity can be counted on during peak demand hours compared to scenarios where the two technologies are deployed separately.

“Hopefully studies like this can also provide useful parallels for other variable renewable energy technologies like offshore wind,” Sodano said. As utilities replace their aging peak plants and are taking energy storage into consideration as part of a low carbon pathway, these findings are paving the way for a reliable grid powered by renewable energy by showing the true value of solar-plus-storage technologies.