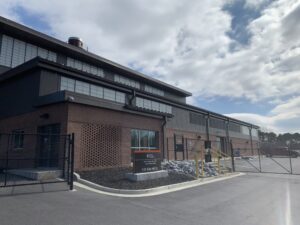 In 2019, a 15 megawatt (MW) Combined Heat and Power (CHP) plant owned and operated by Duke Energy went online on Clemson’s campus. This CHP system provides South Carolina’s Clemson University with steam while also allowing the university to island from the grid to keep critical loads operational when the grid goes down. Heat energy produced by the generation of electricity that would otherwise be wasted in a traditional process, is recovered by the CHP system – requiring less fuel to produce the same amount of energy.

Tony Putnam is the Director of Clemson University’s Utility Services department. He explained that Clemson was already planning an ambitious project to the campus to provide back-up electricity during outages and reduce or eliminate restoration time. “When the grid goes down, we can run most of the university through that CHP plant,” Putnam noted, highlighting the capability of CHP to provide resilient power and heat.

By reducing greenhouse gas emissions the CHP facility also helps Clemson meet its environmental and energy efficiency goals as it works towards net-zero carbon emissions by 2030. Duke Energy owns the facility on its side of the meter, sending electricity produced by the plant to the grid while selling steam to the university.  Revenues from this transaction are credited back to the South Carolina electric customers of Duke Energy in the amount of approximately $1.9 million per year.

“By locating generation sources near load centers with a high thermal demand, this results in one of the most efficient units in the Duke Energy fleet,” said Zachary Kuznar, Managing Director of Regulated Renewables at Duke Energy.  Under Kuznar, who oversees development of CHP, energy storage systems and microgrids for Duke Energy, the company is developing a similar CHP system on the campus of Purdue University in Indiana. 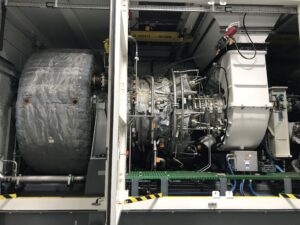 The pilot project, called H2-Orange, came about after the U.S. Department of Energy awarded a $200,000 grant to Siemens Energy to study the use of hydrogen. Duke Energy, Clemson and Siemens Energy all have net-zero carbon goals and are evaluating hydrogen as a low- or no-carbon fuel source to help them meet these goals.

The university is continuing to expand the thermal side of the CHP plant and replace existing steam piping, according to Putnam, and expects the latest upgrade, a 2.8 MW steam turbine generator, to be fully operational in April of this year.

The CHP system produces 60,000 pounds per hour of thermal energy used to heat buildings and water on campus, but the demand for heat decreases in hot South Carolina summers. “The turbine generator will take the steam that is produced on a full time basis and generate power from it,” Putnam explained. “We’ll be running it eight months out of the year and all of that power will be going to campus distribution.”

Partnerships such as the one between Clemson and Duke Energy allows organizations to leverage external funds to transition to clean energy where they would otherwise be unable to. Art Samberg, Clean Power & Industrial Efficiency Program Director at the NC Clean Energy Technology Center, said, “The biggest barrier to CHP, especially in facilities where a resilient supply of electricity is so important – hospitals, universities, military installations – is the capital cost.”

Let’s celebrate Earth Week together with race car driver and environmental activist Leilani Münter in the driver’s seat of an electric vehicle! Join Leilani, Southern Alliance for Clean Energy, and Natural Resources Defense Council for an Earth Week webinar where she will take us through the paces in her electric car and explain why she’s […]

SPI is bringing the Smart Energy Market Tour to the Carolinas in April 2021. We’re partnering with CED Greentech to bring safe-sized, outdoor roadshow events to your community. Think of it as your local farmers market for the energy industry.  Solar Power Events and our partners are committed to helping the industry continue to do business […]