Energy Storage Targets on the Rise Across the Country

Energy storage has the potential to provide a wide array of benefits to the electric grid, and states across the country are increasingly considering statewide targets for the deployment of energy storage resources. The Database of State Incentives for Renewables and Efficiency (DSIRE) recently added energy storage targets and incentives to the database.

California was the first state to adopt an energy storage target, setting a 1,325 MW target across the state’s three major investor-owned utilities, Pacific Gas & Electric, San Diego Gas & Electric, and Southern California Edison. The California Public Utilities Commission (CPUC) officially established the target in 2013, pursuant to legislation enacted in 2010, with the requirement for each utility subdivided by systems installed at the transmission, distribution, and customer levels. 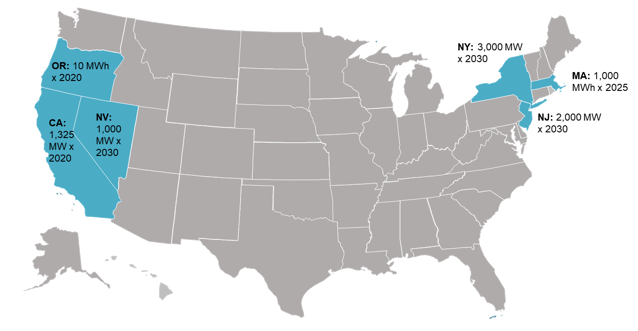 New York became the fourth state to adopt an energy storage target, with 2017 legislation directing the Public Service Commission to develop a specific target. The Governor announced a goal of 1,500 MW of storage by 2025 in early 2018, and the Commission later issued an order establishing a target of 3,000 MW by 2030. New York’s storage target follows the recommendations of the state’s Energy Storage Roadmap, published in 2018.

New Jersey became the fifth state to adopt an energy storage target in 2018, setting its target at 2,000 MW by 2030, with a short-term target of 600 MW by 2021. New Jersey researchers published an energy storage analysis in 2019 including policy recommendations to help achieve these targets.

Nevada became the latest state to adopt an energy storage target in March 2020, with the Public Utilities Commission of Nevada setting a target of 1,000 MW of storage capacity by 2030. In 2017, Nevada lawmakers enacted legislation directing the Commission to determine whether it is in the public interest to adopt energy storage procurement requirements and to study all measurable costs and benefits. The Commission released its final study in October 2018, which found that 700 MW to 1,000 MW of battery storage could be cost-effectively deployed by 2030.

On the Horizon: Virginia

Virginia may soon become the seventh state to adopt an energy storage target. In March 2020, Virginia legislators passed S.B. 851, which includes a storage target of 2,700 MW by 2035, as well as a target of 100% renewable energy by 2050. The Governor has until April 11, 2020 to act on the bill, and the legislature is set to reconvene on April 22nd to address the Governor’s amendments and vetoes to 2020 legislation. However, these dates may be pushed back due to COVID-19.

The DSIRE Insight team is also tracking proposed legislation in Connecticut, which would establish an energy storage procurement target of 1,000 MW by December 31, 2030, as well as multiple Massachusetts bills that would increase the state’s storage target. Legislation introduced in Pennsylvania would also direct the Public Utility Commission to determine an appropriate storage target.

Keep up with legislation and regulatory proceedings related to energy storage targets and other energy storage policies with the 50 States of Grid Modernization report or DSIRE Insight’s other grid modernization policy tracking subscriptions.

August 23-25 class dates will be held in-person in Raleigh, NC. Course will take place from 8:30 am – 5:00 pm at NC Clean Energy Technology Center offices at NC State University. This 40-hour program covers renewable energy technology applications and solar fundamentals (with an eye towards the business side of it), policies that create […]

The bulk of this 40-hour workshop covers topics relating to the National Electrical Code® (NEC) requirements for PV systems and prepares the participant for proper code compliance, wire sizing, equipment specifications, permit processing, commissioning and other necessary steps in the design and installation phases of residential and commercial systems. This 6-week online course covers the […]