The North Carolina Department of Transportation (NCDOT) provided funding to the N.C. Clean Energy Technology Center (NCCETC) to research the potential for producing renewable electricity from wind generated along high traffic corridors on North Carolina highways. The intent of the study was to determine the potential for highway traffic to generate wind energy to support small highway electrical loads such as roadside lighting, signage and emergency signals.

The NCCETC worked with Onyx, LLC, to deploy anemometers (devices for measuring wind) on carefully-selected heavily-traveled highways in three NCDOT Highway Divisions. The anemometers logged turbulent wind generation along Interstate 40/85 in Whitsett, Guilford County, U.S. 1 in Cary, Wake County and Interstate 95 in Lumberton, Robeson County from April through September 2019. The data from these sites was logged and sent electronically to the NCCETC for analysis.

The anemometers collected data continuously from each site for approximately two months. Once a sufficient amount of data was recorded, the NCCETC modeled the energy potential using a 300, 1,500 and 3,000 watt Vertical Axis Wind Turbine (VAWT) from Colite Technologies, of Columbia, South Carolina. The potential energy production varied widely from site to site based on factors including number of lanes of traffic, median or center barrier type, roadside barrier type, traffic volume and vehicle type. The project team found that a single 3,000-watt VAWT at the site with the best potential (Whitsett) could generate 818,000 watt-hours of electricity annually. The annualized cost to generate wind energy from the 3,000-watt VAWT was in the range of $50 per kWh – which exceeds the equivalent generation of renewable solar energy. 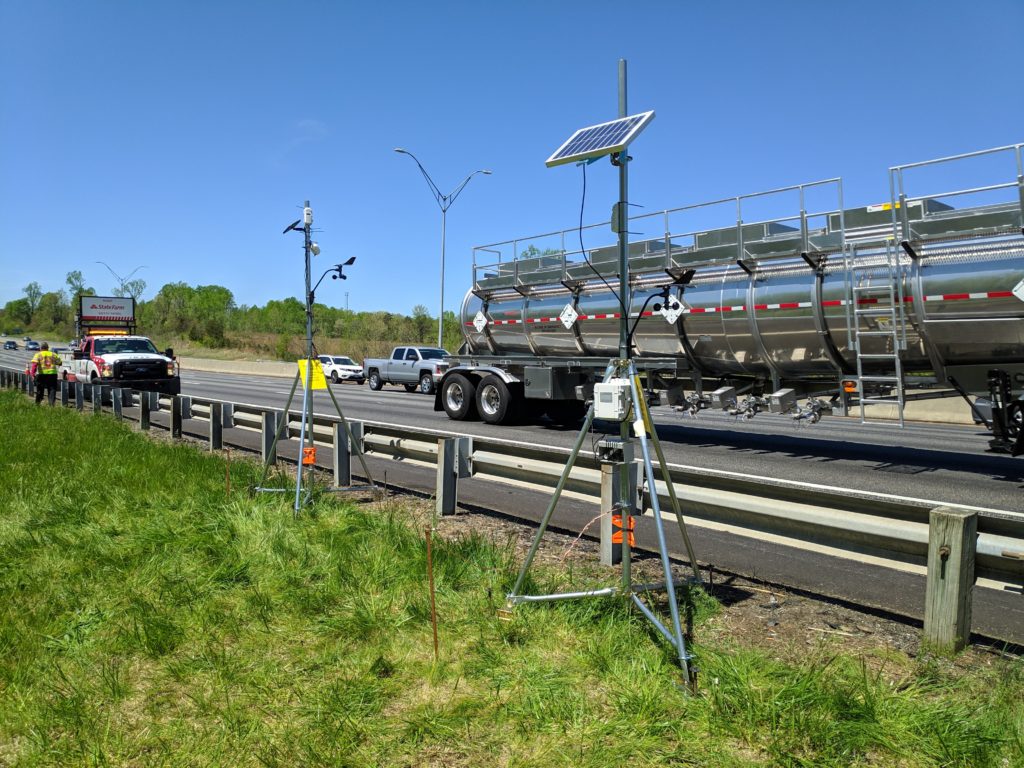 While the results were not ideal, the team found that there is still considerable potential to generate electricity from traffic-generated turbulence, and like many new renewable energy technologies, the lifetime costs will decrease with increased deployments. The team found that if this mode of generation were to expand around the country with more research, improved technology and funding, the costs would come down over time.

“There’s definitely potential there,” said Art Samberg, Principal Investigator of the project and Clean Power & Industrial Efficiency Assistant Director at NCCETC. “The study showed there is a potential to generate electricity from these passing vehicles. The question is, what will it cost? At the current state of technology, that cost of energy is relatively high. However, one should not forget what the cost for solar energy was 30 years ago. We do not want to dismiss this as a long-term viable source of renewable energy. I think that with the right funding and the resulting advancements in VAWT technology, it could be possible.”

The team recommends the NCDOT consider a pilot installation of at least one VAWT that could be placed at multiple locations across NCDOT Highway Divisions, which would help facilitate a more refined assessment of the energy potential and cost under a larger-scale deployment scenario.

NCCETC and the project team plan to continue to monitor opportunities and conduct research to determine the availability of federal and state grants that could be applied to the funding of developing a new wind turbine on North Carolina roadways.

The final project report is planned to be released in February 2020.