In January of 2019, North Carolina State University brought online 6.5 megawatts (MW) of combined heat and power (CHP) on Centennial Campus. Between the original system 11 MW CHP system installed in 2012 at Cates Avenue, all told, the university now has a total of 17.5 MW of (CHP). This generation capacity positions the university to accommodate Fitts-Woolard Hall and Plant Sciences Initiative Building that are in various stages of construction on Centennial Campus, as well as existing structures. It also means a 12 percent overall Greenhouse Gas (GHG) emissions reduction from CHP to support the university’s Climate Action Plan.

Combined heat and power, or cogeneration, is the simultaneous production of electricity and the utilization of “waste” heat for the production of steam – which provides the ability to heat and cool buildings or to generate additional capacity. When assessing new energy systems, efficiency and resilience are a high priority, but other factors such as space constraints are also important.

The university has ambitious sustainability goals targeting reduced waste, GHG emissions and energy consumption. Initially, the university sought to reduce energy usage by 30 percent on a Gross Square Foot (GSF) basis, as compared to a 2003 baseline. Having surpassed that goal by reaching a 33 percent reduction in FY 2016 17, the university is now striving for a 40 percent reduction of campus energy per GSF, as part of their strategic plans.

In addition, “it also aligns with Executive Order 80,” a statewide government energy initiative issued by Governor Roy Cooper in 2018, said Hall, as well as “expected legislation that will apply more directly to the entire University of North Carolina System.” 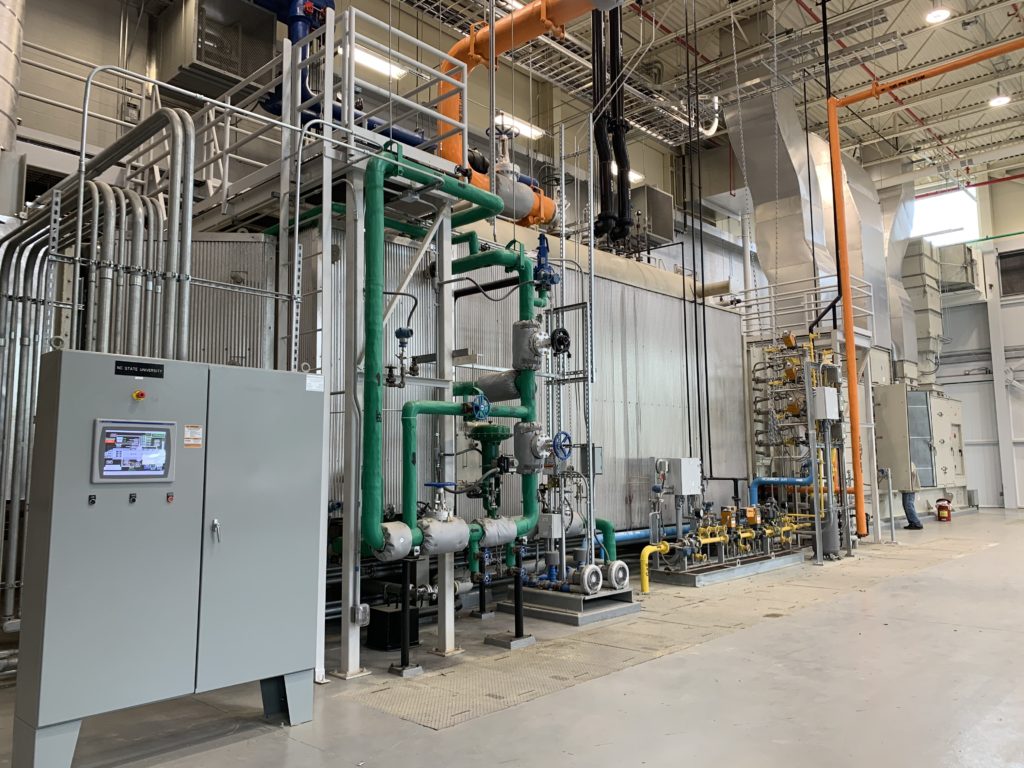 With a goal of reaching carbon neutrality by 2050, the additional 6.5 MW of CHP capacity, which includes a 5.5 MW gas turbine and 1 MW of steam turbine generation, this translates to the university purchasing less power from Duke Energy, while supporting energy resilience and reducing the impact on the grid.

“Due to the increased efficiency of the CHP system, we anticipate a 5-6 percent reduction in our overall campus energy per GSF,” said Hall. CHP systems can be configured to operate in “island mode” which maintains power to critical assets when the Duke Energy grid is down.

The campus of NC State University spans more than 2,000 acres, has more than 30,000 students, with 9,000 faculty and staff. NC State’s Centennial Campus is a unique collaboration of university, public and private partners working together to promote the university’s research and academic mission and the economic development of the region and the state. More than 70 partners are co-located on Centennial Campus, including offices, labs, hotels and residential space.

This capital improvement was among many energy infrastructure projects in development through the Spring of 2019. Those projects, including grid enhancement, are vital to meeting the needs of a growing Centennial Campus. Projects like the new CHP system are solutions for creating capacity for growth, energy reliability and cost savings.

There are currently about 274 CHP systems installed at universities and colleges across the United States, with an overall generation capacity of 2,535 MW. According to ICF 1 , nationally, there remains a technical potential capacity of 13,932 MW specific to colleges and universities.