The report finds that 44 states and the District of Columbia took actions related to grid modernization during Q1 2019 (see figure below), with the greatest number of actions relating to energy storage deployment, distribution system planning, data access policies, and utility business model reforms.

A total of 395 grid modernization actions were taken during Q1 2019, representing a 53% increase over Q1 2018 (259 actions) and a 167% increase over Q1 2017 (148 actions). New York, California, and Massachusetts took the greatest number of actions during the quarter, followed by Minnesota, New Jersey, Hawaii, and New Hampshire. 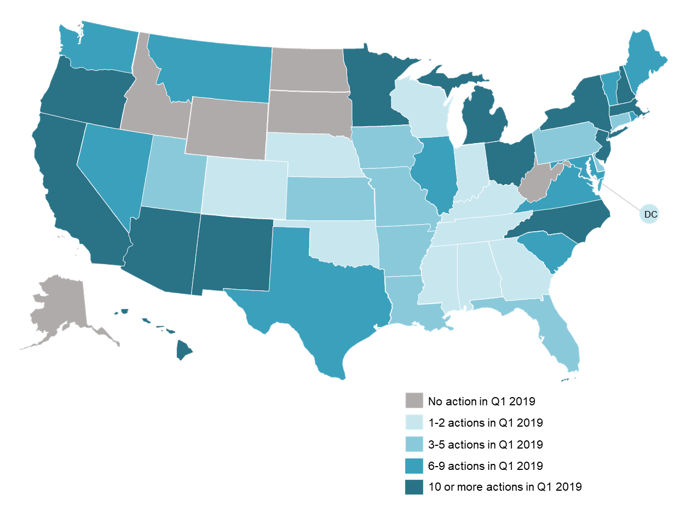 “Grid modernization activity jumped up in Q1 2019, with a great deal of new legislation coming under consideration,” noted Autumn Proudlove, lead author of the report and Senior Manager of Policy Research at NCCETC. “The majority of the grid modernization bills being introduced relate to energy storage, with many states working to integrate storage into existing policy and incentive frameworks.”

The report notes the top five policy developments of Q1 2019 were:

“We’re seeing a trend of regulators pushing utilities to consider the full potential of grid modernization investments,” observed David Sarkisian, Senior Policy Analyst at NCCETC. “For instance, several regulators have been questioning advanced metering infrastructure deployments when they are not accompanied by new programs or rate structures to maximize the benefits offered by the technology.”

***Due to COVID-19, the July 13 – July 15 class dates will now be held live in a virtual classroom*** CLICK HERE TO REGISTER This 40-hour program covers renewable energy technology applications and solar fundamentals (with an eye towards the business side of it), policies that create the market to better help you select that […]

WHERE ENERGY POLICY GETS TO WORK. Over the course of the next six months, NCSEA will be offering a monthly webinar series featuring varying topics in clean energy from finance to policy and market insights. Join hundreds of attendees from across the country to get the latest scoop on trending clean energy topics sweeping the industry. Each […]